Articles
You are here: Home1 / Articles2 / Articles3 / Avianza shows the benefits and possibilities of turkey meat... 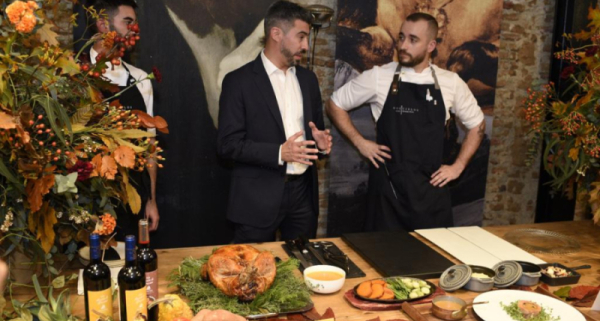 Madrid, November 24, 2022 - Avianza, the Spanish Interprofessional Association of Poultry Meat, and the Ministry of Agriculture. Fisheries and Food (MAPA), wanted to join the traditional celebration of Thanksgiving Day, where the turkey is the main protagonist. For this, they have counted on chef Damián González, right hand of the Torres Brothers, to carry out an informative workshop on turkey meat in the prestigious restaurant Dos Cielos (Hotel Palacio de los Duques Gran Meliá).

During the gastronomic workshop, which was attended by around fifty people, including celebrities, journalists and influencers, and which could be followed live on Avianza's Instagram channel, the chef demonstrated various preparation techniques such as preparation, type of cooking and oven temperatures. He also gave the keys to carving and plating techniques, as well as the best culinary combinations. As a finishing touch, the attendees then enjoyed an authentic Thanksgiving dinner in a unique and relaxed atmosphere where they savored the prepared turkey.

The objective of this workshop was to highlight the benefits of turkey meat, such as its low fat content, its reduced caloric intake and the presence of proteins of high biological value. All this makes turkey meat one of the most interesting lean meats on the market.

In the words of Jordi Montfort, secretary general of Avianza, "with actions like this one, Avianza wants to continue highlighting the quality and versatility of meats such as turkey, which in addition to contributing to a healthy diet, allows us to prepare delicious dishes for the most important celebrations or for everyday dishes".

Turkey meat is one of the most versatile white meats available due to its excellent combination of health and flavor. In the case of Thanksgiving, one of the most important holidays in the United States, celebrated on the fourth Thursday of November, it is the star dish and is usually served stuffed and accompanied by cranberry sauce. Stuffed turkey is also one of the most common recipes for the Christmas holidays.

Want to join the conversation?
Feel free to contribute!